Went for a run on Friday night.  Glanced down at the watch just as the 3 mile mark came up.  6.48 for the mile.  6.48?  Where did that come from?  That’s getting to be like the old days.  Obviously, at this point I had to keep the tempo up (hadn’t even realised I was going for a good tempo run).  At the end of the run, I had 6 miles in the bag at an average of 6.48 minutes per mile.  Absolutely chuffed.  Gets the urge going to look up some running dates for the diary instead of just sportives.  Clearly, the cycling is helping the running and vice versa (although Mark will tell you you that cycling training does not make you a better runner – not convinced). 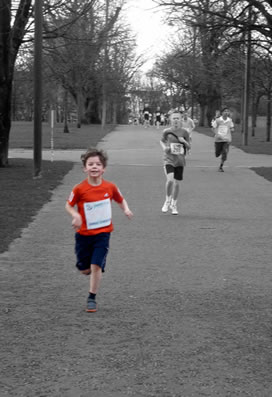 Coasting along without a care

And so to Saturday and the Combat Stress 5K in Glasgow Green.  This run is organised by John Henderson, a fellow member of Gio’s in the Springburn Harriers.  We did this run 2 years ago, and my boy, Ewan (then aged 6) did the run.  A slight stitch early on left him having to walk a little early on, but he then did brilliantly and finished in just over half an hour.  A great achievement.

This year’s event was very well attended and again Gio was in attendance, looking to run close to 20 mins.  Ewan was back for a 2nd bash, and this time I had my Garmin to get an official clocking of his time.  Yes, it’s 5k but I work in miles.  I couldn’t believe it when I saw the wee fella do mile 1 in 8.07.  Great guns for an 8 year old.  On he pushed and 8.10 for mile 2 was again brilliant.  The wee chap was blowing now but kicked on and put in a 3rd mile of 7.50, and a sprint finish to take the acclaim of the crowd saw him finish in 25.06 with an average of 8.01 minutes per mile.  What an absolute star.

I’m sure he was leaving a little in the tank for the  next day’s big cycle – a 4th straight ride over the Duke’s Pass.  If Ian’s along, the post will arrive soon after the run.  Otherwise, there’ll likely be a few days delay…..

I am the skipper of the "Do It For Dee" LEJOG team. Others may tell you this is not true. But it is so. The captain on the road, the inspiration of all.
View all posts by myjhigh »

Posted on March 5, 2012, in General and tagged ewan running. Bookmark the permalink. 2 Comments.