Cycling tip #23 – use your head when braking in the rain?

Sunday. Day 2 of the Lakes expedition. After a poor nights kip for some (snoring, oversoft mattress, loud expulsions of windy-pops) it was up and at ’em for breakfast. Various goodies had been acquired/ brought with the team, our milk safe in the fridge overnight thanks to sticky labels (OK, I maybe went a little overboard, but when I was in student residences, milk was always getting nicked). We chatted to a few other folk staying in the hostel who were doing a bit of walking and watching their friend take part in a big swim event later that morning. Breakfast done, we packed up, grabbed our gear from the drying room, spent ages trying to find John’s overshoes in everyone elses bag only for me to find them – in his bag – then we were off. The plan was to head along the “Fred” route and sort of pick up somewhere along the route were we left off to get the other hills done. More parking fun was to ensue, the swimming event and the triathalon meaning that there were people everywhere and not a space to be found. Eventually we found a layby space and decamped, the rain starting to fall as we got kitted out. 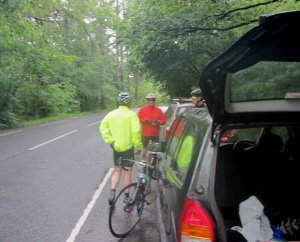 shorts? have you seen the weather?

right, this is where we left the cars…

We set off along the flat route, through Ambleside to the first climb of the day – Holbeck Lane leading to Troutbeck (what great names some of these places have!). I got off to a bad start here, my front mech jamming, unable to swap from the big to the small ring. With no hope of getting up the hill in those gears, I yelled to the others to go on (no, its not another puncture), clipped one foot out, banged my foot on the mech and turned the pedal to get the chain to shift over. Result. The others were quickly vanishing, so I pushed hard to close on them as they toiled up the hill. After a short while I was back in touch, breathing hard as we all slogged up the slope, the occasional car squeezing by us as we made our way further up to the Kirkstone pass. As we climbed, dozens of cyclists (triathletes) started to stream toward us, down the hill. A few “hello’s” from John at the front were ignored (seriouz bizniz this triathllon?), only getting the occasional nod, until, to our surprise, a huge yell of “Guys!” – our very own Gio belting down the hill. We responded with our own cheers and hello’s as he vanished down the hill behind us, and kept plugging away at the hill. Soon we were passing an ambulance attending to an unfortunate triathlete on a corner, a convoy of cars behind us only able to pass us once we’d cleared the accident. We continued upwards, calling out to the steady stream of downward cyclists to watch for the accident, and after thirty or so minutes of climbing we reached the top. 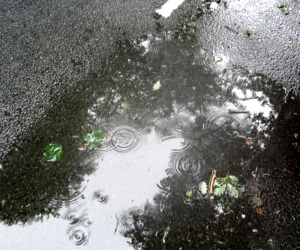 The steep descent required serious braking, sharp corners, oncoming cars and the occasional walking or slow, tired cyclist to watch out for. The slope levelled off, and several miles of flattish roads were ahead, time for the train to come in to play. Sadly this was not to be, as we hit a short rise, my front tyre was looking decidely flat, so I had to stop. Pumped up (slow puncture?) and we moved on, but it wasn’t more than a few miles before I had to stop again for more air. Then again as we turned to climb to Matterdale End. And at the top (well, the first top, there was a second not far ahead). And at the bottom. At least the (pricey) tube I’d bought at the top of Whinlatter had a valve that agreed with my pump. This was getting silly, so a new tube went in. Tyre patches also applied as it was clear the tyre was seriously gubbed, gauging roughly where David had seen air coming out the tyre wall on one of the many previous stops. Patched and tubed, we moved on, this time, my tyre seeming to hold the air without issue, but planningon heading to Keswick to get me a new front tyre to be sure of no further incidents today.

We turned on to the A66, Sam taking the lead, the rest of us following, the road starting to head downhill. We spread out a little, mostly keeping to the left of the white line at the edge of the road to give the fast, overtaking traffic more space. We must have been doing around 25mph when it happened. I was at the back, and suddenly and seemingly in slow motion, I could see Sammy was in trouble – his front wheel slid from under him, tipping him over the bike, his head hitting the tarmac, and he lay there motionless as we all careened to a halt. Bryan got to him first – “don’t move him” I yelled as I got off my bike. “Sammy, you ok?”. A few moments passed. “I think so”. “Can you move?”. “Yeah”. “Help him up, slowly”. Bryan and I helped him to the kerb of the junction we were now at and sat him down. “You alright?”. “Mmm”. I’m no medic, but I’ve got a fair bit of experience of dealing with a postictal Dee, so started to apply some of the cogntive checks I’d picked up over the years. “Follow my finger with your eyes”. Left, right, up, down. All seemed well. “Can you move your fingers?”. Yup. “Toes”. Yup. “Anywhere hurting?”. “My head” (surprise). “here” (waist/ hip). “Do you feel sick?”. “No”. So, no concussion (probably?), so far, so good (ish). “What year is it?”. This seemed to pose an issue for a few moments… “2012?”. Ok. “Where are we?”. “The A66, Lake District”. “Who am I?”. “You’re Ian…. I’m feeling a bit funny now”. A quick conflab with the rest – we’re getting him an ambulance, he’s not right and needs a proper medic to check him out. Bryan got on the phone, 999, me using my wee Garmin to call our rough location, getting John to keep him talking, don’t let him fall asleep. Bryan relayed our location, the controller at the other end getting him to ask Sammy his name. He got that right, but was now getting more confused about where we were going, where we’d just been, and was getting cold. I whipped off my jacket for him as Bryan got off the phone. We didn’t have to wait long for the blaring of sirens and the flashing blues as the ambulance arrived. The paramedic took his time to check Sam’s neck, then got him to follow his finger (turning his neck) left then right, head up, chin to chest (neck working ok). “Was he unconscious?”. “Maybe, but only a second or two, can’t be sure”. “OK, seems you won’t need a brace, lets get you in the ambulance”. “where you taking him?”. “Carlisle”. Hmm. “Can you take his bike?”. “I’m not supposed to, but I’m a cyclist too, ok, wait while we get things sorted, then we’ll take it for you”. We took charge of Sam’s car key, took his Garmin for safekeeping, then passed the bike to the ambulance crew, who were quickly off, sirens and lights down the road.

Ok, now what? Back on the bikes? Keep going to Keswick John reckoned, bike shop, ditch bikes, grab a taxi back to the cars. Sound plan. The rain was tipping down, we cautiously made our way along the road, cars dangerously close at times, all of us extra aware of the drains, bulging cats-eyes and any potholes that could lie ahead. The longest four miles ever were ahead of us, the four of us moving in mostly silence, mulling over the recent events. We got there, found the bike shop from the day before, John and Bryan going in to see about a taxi. They were soon out – turns out we’re less than 30 minutes away from the cars, bike shop guy reckons we’d be as quick biking it as waiting for taxi. So a quick refuel with gel/bars and we got ready to set off back up the road. Bryan’s phone went – Sammy! Seems they’d turfed him out of A&E, his ride in the ambulance seeing him mostly recovered, the doc showing more concern over his hip than his head. Good news. Less so for the road, as we were immediately on a hill, working hard to get to the top 4 or 5 miles further on. The rest of the route we fell back into the train, taking our 0.5 mile stints at the head of the group, as we set a quick pace on the favourable roads, some shorter upward hills but a good few downward or easy flat sections allowing us to hit decent speeds all the way back to Ambleside. Ok, where’s the cars? Erm, not sure. Think its this way (stupid Garmin not playing ball with the ‘back to start’ function). An extra loop of Ambleside’s one way system and we hit the right road, a mile or so further on and we were back at the layby and the cars. Ride done. 50 miles (5 or so missing from me stopping my Garmin at the Sammy incident). 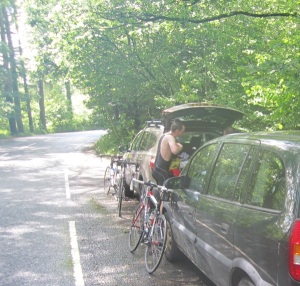 typical – as soon as we’re done, the sun comes out

A fun drive from Ambleside to the M6 (Sammy’s in-car GPS taking us the ‘scenic route’), and we were soon at Carlisle, picked up a bored (and much better) Sam, only effected by a sore hip and a bit too much daytime TV while he waited for us, and headed home. Curry in Cambuslang rounded off an eventful weekend – not really the 170+ planned for the weekend, and missed out on a chance to try the infamous Hardnot and Wyrnose climbs, but I reckon we’re excused due to all the other hills, weather, punctures, accident, floods and er, hills.